Nigerian Naira continued to gain value against most of the foreign currencies in the second half of 2019 and closed the year at higher rates in parallel and foreign exchange markets. We can say Naira currency had a stabile value for 2019. 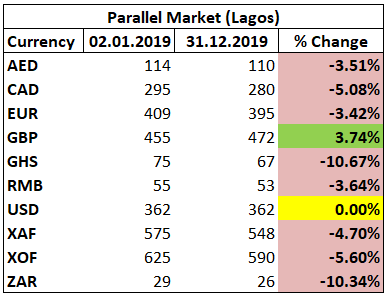 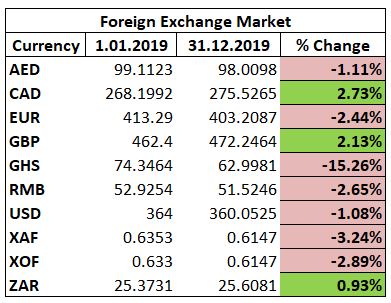 One exception against rise of Naira is British Pound (GBP). Pound Sterling had a 1.76% value gain against naira in the first half of the year, this incline in GBP rate continued in the second half of the year as well, and the Pound to Naira exchange rate closed the year at N472 in black market, that is 3.74% higher than last year.

Another interesting foreign currency in 2019 has been South African Rand (ZAR). Rand rate against Naira melt down 10.34% in black market whereas the rate declared by Central Bank of Nigeria (CBN) at the end of the year pointed a 3.14% rise. This may be a strategic move made by CBN to regulate trade with this African country. 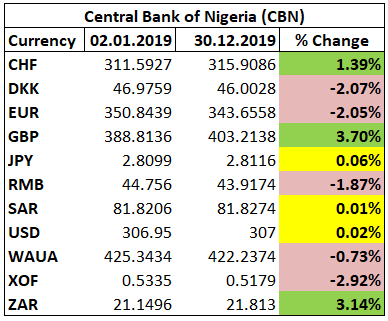 US Dollar rate has closed the year with no change. The rise of Naira against US Dollar turned to opposite direction in the second half and the year ended evenly for the rate.

Everything could be seen very stabile and positive for Nigeria economy in 2019 if we did not record the sharp increases in the inflation rate in the second half of the year. Inflation rates were relatively low and pointed positive signs for the economy in the first half. However beginning from September, the rises in the index were higher than expected. The closure of borders by goverment in order to fight smuggling deeply affected food prices. And the impact continues to grow as it has been more than four months now. Inflation rate was recorded 11.86% November which has been a peak since April 2018. As we have the inflation rate for December 2019 today, which is announced as 11.98%, we can say that the situation keeps its urgency.

The positive movement in the value of Nigerian Naira in parallel and foreign exchange markets is not a bad result for Nigerian economy in 2019. However, a well-managed exchange rate is not enough by itself. High inflation rates in the second half of the year is a heavy burden on all sectors. Nigeria should add lower inflation rates next to stabile exchange rates in 2020 to achieve the expected growth.